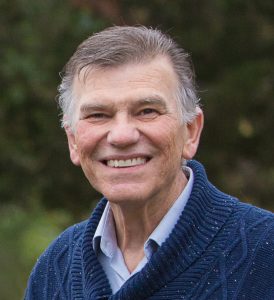 A Gentle Man leaves us gently

It is with broken hearts that we announce the peaceful passing of Dr Henry Reimer at home on May 20, 2020, with family by his side. He was the loving soulmate to his wife of 47 years, Bonny, and adored father of Mark Reimer (& Marie) and Tenille Reimer-Smith.

He created and wore proudly a T-shirt which read “My 6 Greatest Blessings Call Me Opa.” Those blessings are Saylor, Colm, Reyth, Sloan, Reggie and Elsie. There is no doubt that Opa will always be on the sidelines cheering them on throughout their lives.

He leaves behind his brothers Jon & Vern, his sisters Wanda Jones and Lydia Dietrich (Murray.) He’ll also be greatly missed by his brothers-in law Dan McKinney (Kelly) and Rick McKinney (Lynda) and sister-in-law Vicki Lusignan (Mike.) He was loved by many cousins, nieces and nephews.

Henry was born and raised in Kingsville/Leamington. He taught science at KDHS for 10 years before returning to school and becoming a Doctor of Chiropractic.

He was the owner of Renaissance Chiropractic Natural Health Centre for 29 years and felt privileged to be entrusted with the care of his chiropractic family. He cared and respected each and every one and truly considered them friends.
Henry will be remembered as a gentle and caring man. Above all, he was kind, and never understood deceit or malice in others. He led by example and as we attempt to emulate his loving, non-judgemental character we will pay respect to his memory. That is his legacy.

Special thanks to all his patients who have entrusted their care to him and asked after his well-being. Thanks to the nurses of the VON (especially Maria B, Jessica D and Stacey T), Dr. Rukavina and the nurses of Hospice.

Cremation has taken place. A celebration of life will be held at a later date. If you wish to show your respect in honour of Henry, any donation to support Prostate Cancer would be appreciated. Too many of our men are losing this battle. KNOW YOUR PSA! Thank you.

Love to all, in Henry’s name.